Florida will buy 20,000 acres in Everglades to block oil-drilling plan

The state will buy 20,000 acres of wetlands in the Florida Everglades for no less than $16.5 million to block the possibility of oil-drilling there, officials announced Wednesday.

It’s not a certainty that the owner, Kanter Real Estate LLC, would have struck oil there or would actually have tried to, but it recently secured an exploratory drilling permit after waging a legal battle with the Florida Department of Environmental Protection.

That triggered alarm in Broward and Dade counties, which get drinking water from the Everglades.

“This is guaranteeing that the heart of the Everglades is in public ownership and secure for future generations,” said DEP Secretary Noah Valenstein in a press conference in Fort Lauderdale. “We haven’t seen a land acquisition like this in more than a decade.” 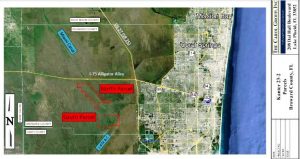 The Kanter property is in western Broward County, adjacent to 600,000 acres of state-owned land in Water Conservation Area 3.

Gov. Ron DeSantis, also at the press conference, said that DEP denied Kanter a drilling permit but lost the fight in court when Kanter appealed.

“Legally, they had the rights to do this on the land, and that’s why we had to have a negotiation and do this deal,” DeSantis said. “My thing is, we’re putting all this effort in there, and I don’t want some kind of accident [an oil spill] causing all these problems.”

Permits to drill for oil and natural gas also are issued for sites in Big Cypress National Preserve and in the Apalachicola Basin.

The Sierra Club of Florida, which supports clean energy and opposes oil and gas drilling anywhere in the state, welcomed news about the land purchase. So did the South Florida Wildlands Association, though its executive director pointed out that the drilling plan still faced permitting hurdles in the Army Corps of Engineers – a party to the state/federal Everglades restoration project – in order to destroy wetlands, so the plan may never have materialized.

“It’s a huge relief. Oil-drilling and the Everglades are not a good combination,” said the director, Matthew Schwartz. Still, he said, there is little chance the Kanter family would have found oil on the site, no more than a 23 percent chance by their own estimates.

“They must have known the chance of finding oil was unlikely. They also knew this was extremely distressing to the people of South Florida,” Schwartz said.

“Did they know they would get a buyout? Who knows?”

For years, state and federal authorities have been working to restore the damaged Everglades, where swaths of the famous River of Grass were drained and converted to land for development and agriculture, and parts of it are polluted and choked with invasive species. Categorized as a “biosphere of international significance” and widely known as a natural wonder, the Florida Everglades is home to thousands of rare species of plants and animals living in an ecosystem like no other in the world.

Florida will buy 20,000 acres in Everglades to block oil-drilling plan