Florida’s first statewide resilience officer, appointed to protect the state from the ravages of climate change, has left after a short stint.

Environmentalists, who had high hopes early this year about the state at last tackling climate change, are now wondering what went wrong. 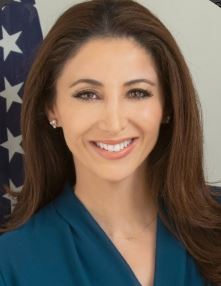 Julia Nesheiwat, appointed by Gov. Ron DeSantis to a post he created, started her job July 31, 2019, and earned an annual salary of $145,00, according to state records.

She had been traveling around Florida, visiting municipalities, military bases, ports and other key sites, and had been meeting with government authorities and environmental groups.

“Pleased to welcome Dr. Julia Nesheiwat, who will serve as Deputy Assistant to the President working on Homeland Security and Resilience. She comes with extensive national security experience, which will be invaluable for this important role.” – NSA O’Brien

She becomes the fourth person in three years to hold this post.

Florida environmentalists who initially were encouraged by Gov. DeSantis’ appointment of a state resilience officer found the news about Nesheiwat’s departure disappointing though not shocking.

“Obviously, something was amiss,” said Deborah Foote, government affairs and political director with the Florida chapter of the Sierra Club. “She had few people and resources, so how was this to succeed?”

Susan Glickman, Florida director of the Southern Alliance for Clean Energy, said she met with Nesheiwat several times and found her supportive of clean-energy policies, which Florida legislative leaders have not embraced.

Scientists say that switching from fossil fuels to clean energy – the kinds that do not cause greenhouse gases – is essential to mitigate climate change, which is causing coastal flooding, inland flooding, increased heat, severe weather and intrusion by tropical plants and animals, among other problems.

Conservative leaders are doing little this session to convert to clean energy. Exceptions are a bill to commission a master plan for installing electric-vehicle charging stations along state highways and a bill to allow public schools to install rooftop solar arrays.

“It was disappointing to learn Dr. Nesheiwat would leave her post,” Glickman said. “After six months of listening to stakeholders around the state, she understood the threats and opportunities from climate change for Florida’s economy. Julia knows the costs that communities are paying to address rising sea levels, chronic flooding, aging infrastructure, extreme heat and stronger storms.

Glickman added: “Recognizing that everyone has a responsibility to achieve emissions reductions, she (Nesheiwat) said that clean energy solutions must be part of a resilience strategy.”

Foote, of the Sierra Club, said Nesheiwat’s shoes will be hard to fill.

“She had many meetings throughout the state with a wide variety of stakeholders and was in the process of creating a statewide strategy that included guiding principles for municipalities,” Foote said. “She believed in a phased-in approach, including natural gas as a bridge resource [which Sierra opposes].

“The question is, what is next in terms of that plan? … I don’t see that any of the legislation moving forward provides any sort of support [for resilience], so how does the state attract and retain someone?”

Nesheiwat would have chaired a task force on sea-level rise to be conducted under a new agency, the Statewide Office of Resiliency, answering to the governor. Legislation to create that agency and fund it with $500,000 is pending in the Senate.

Nesheiwat told the Tampa Bay Times “she provided a six-month report to DeSantis around beginning of January. The Times asked for a copy of that report on Jan. 7. A governor’s office employee said the records were compiled by Jan. 15, but DeSantis’ open government staff has not yet provided the report, saying it’s undergoing legal review.”