Trump’s sneering at solar is stupid in the Sunshine State

A 74-year-old man stopped by Florida’s massive retirement mecca known as The Villages last week. That wouldn’t be big news except it was President Donald J. Trump, who fit right in among all those golf-cart riding senior citizens (as would his challenger, Joe Biden, 77).

Trump felt the need to campaign at The Villages because his once rock-solid support among seniors is slipping. This no doubt has something to do with his constant promises that the deadly plague of COVID-19 will just go away, disappearing like a fist when you open your hand.

Those assurances are like telling all the characters in the “Nightmare on Elm Street” movies that Freddie Krueger is nothing to worry about and his super-sharp glove is just for giving people a good back-scratch.

I don’t know how much Trump helped himself with The Villages’ voters last week. At one point, he attacked his opponent’s energy plan because it wouldn’t give free reign to polluting industries like “beautiful” coal and oil.

He sneered that Biden’s call for boosting alternative energy sources like wind and solar “would mean that America’s seniors have no air conditioning during the summer, no heat during the winter, and no electricity during peak hours.” 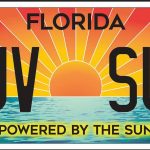 As often happens, Trump’s premise was wrong. He talks as if the power created by solar panels and wind turbines cannot be stored for use when the sun goes down and the wind stops blowing. (I can picture one of his aides trying to explain it to him, “See, Mr. President, they have these things called batteries…” “Are they made with batter, like the kind they use on my delicious dinners from Kentucky Fried Chicken?” “No, Mr. President…”)

This isn’t the first time Trump has gone after windmills — which he claims, with zero evidence, can cause cancer — and solar panels.

But seeing him attacking wind and solar power in Florida is an irony of the first order. Why? Because the world’s largest producer of wind and solar energy is a company based in Florida — NextEra Energy, which started life in 1925 as Florida Power & Light.

Unlike the coal industry, which is dying because of market forces, and the oil and gas industry, which has been hurt by the drop in demand during the pandemic, NextEra is flourishing. Last year its operating revenues totaled $19.2 billion.

No less an authority than The Economist recently called NextEra “America’s most valuable energy firm,” and touted its profitability at a time when investing in oil companies like ExxonMobil and Chevron “looks only slightly shrewder than stuffing cash in a blender.”

NextEra is as much a product of Florida as orange juice and tacky tourist tattoos. Its corporate headquarters is in Juno Beach. In addition to owning FPL, which provides power to thousands of customers across South Florida, it also recently acquired Gulf Power, which serves customers in the Panhandle.

From its Florida base, NextEra operates across 37 states and Canada, with wind farms in places like Kansas and solar farms in places like South Carolina. It’s already got more energy storage than any other company in the United States and it has plans for building the biggest-ever stand-alone battery storage system. As Sir Mix-A-Lot might say, they like big batteries and they cannot lie.

Warming up to solar power

While NextEra has gone big on solar nationwide, Florida — despite being known as the “Sunshine State” — has taken a while to warm up to the idea. That’s according to Susan Glickman of the Southern Alliance for Clean Energy, which compiles an annual report on how the states are doing on alternate energy sources. Last year Florida more than doubled its installed solar capacity from 2018, reaching nearly 1.7 gigawatts.

“Florida is getting better, but it’s also just getting started,” Glickman said. It helps, she said, that “the cost for solar has gotten cheaper than traditional sources.”

Solar is extremely popular with Florida voters, she pointed out. Four years ago, a proposed constitutional amendment to provide property tax breaks for people who install solar panels on their homes passed by an overwhelming 73 percent to 27 percent margin.

Solar’s popularity is encouraging, given Florida’s hostility to offshore oil drilling because of its threat to our tourism and seafood industries. The list of alternatives is a short one for Florida.

Nuclear plants have become far too expensive to build. Wind is impractical here because our soft sea breezes aren’t strong and steady enough to keep a turbine’s blades turning. But solar works fine, and you never have to worry about a solar spill the way you would with oil rigs.

There’s just one key demographic that doesn’t like solar power: the state’s major utilities. Or rather, they don’t like it when they can’t control it.

They have used their considerable political clout to make rules that squelch the spread of solar energy outside of their own efforts. That’s why, as The New York Times pointed out in a story last year, when it comes to solar Florida “trails 19 states, including not-so-sunny Massachusetts, New Jersey, New York and Maryland.”

We’re one of only eight states that do not allow the sale of solar electricity directly to consumers unless it’s being provided by one of those utilities. Florida’s rules also require anyone who installs a large solar array on their home to buy an expensive insurance policy for it. Meanwhile, the utilities can recover the cost of building new solar plants by charging their customers via a boost in the rates.

The utilities play the Goliath role with ease, but sometimes a little slingshot-toting David stuns them.

That happened in 2016, when they managed to get on the ballot a deceptive constitutional amendment that sounded pro-solar but was just the opposite. It would have locked solar companies out of state markets and imposed higher rates and fees for households and businesses that chose to go with solar.

The truth came out in a tape of one of the amendment’s supporters from the right-wing James Madison Institute. He was caught at a conference bragging that the amendment was a nifty bit of “political jiu-jitsu” to shut down rogue solar in the Sunshine State. He encouraged anti-solar activists from other states to “use the language of promoting solar” in their own efforts to destroy it. That way they could use solar energy’s own popularity against it, he explained.

A coalition of grassroots groups that came together to defeat the amendment included not only solar manufacturers and environmental organizations concerned about climate change but also the notoriously rebellious Tea Party. You wouldn’t find a stranger set of bedfellows in a Borat movie.

The utilities blew more than $20 million trying to pass the amendment but failed to get the votes they needed. The utilities who tried to trick the voters included Florida Power & Light, along with Duke Energy, Gulf Power, and Tampa Electric. FPL alone spent more than $8 million, which the Herald reported “could be the largest amount any single entity has ever spent on a ballot initiative in Florida.”

Just like Florida Power & Light — owned by a solar giant but trying to block the growth of the solar industry — Trump has taken a stance on solar power that sounds more than a little confused. On the one hand, he’s been slamming solar for years, and in 2018 imposed such stiff tariffs on foreign-made solar panels that the price in America is now among the highest in the world.

On the other hand, on the official White House website, he brags that the United States. “recently became the second largest generator of solar power,” as if it were his doing.

Just out of curiosity, I tried to find someone in the solar business who could tell me whether folks in The Villages are as opposed to solar as Trump is. Turns out they love solar.

“Oh, there’s plenty of demand for solar in The Villages,” said Bob Hislop of The King’s Solar, based in Ocala. Folks there like it not only to power their homes but also to warm their pools.

I told him that the president had just visited The Villages and had been bad-mouthing solar power, compared to oil and coal. Hislop expressed amazement that he’d do such a thing.

I can’t tell you exactly what Hislop said in response, but the gist of it was that sometimes Trump produces statements that appear to originate from a place where the sun don’t shine.

Trump’s sneering at solar is stupid in the Sunshine State

Craig Pittman is a native Floridian. In 30 years at the Tampa Bay Times, he won numerous state and national awards for his environmental reporting. He is the author of six books, including the New York Times bestseller Oh, Florida! How America's Weirdest State Influences the Rest of the Country, which won a gold medal from the Florida Book Awards. His latest, published in 2021, is The State You're In: Florida Men, Florida Women, and Other Wildlife. In 2020 the Florida Heritage Book Festival named him a Florida Literary Legend. Craig is co-host of the "Welcome to Florida" podcast. He lives in St. Petersburg with his wife and children.