On a spring morning in Tallahassee, Gov. Ron DeSantis’ schedule included an in-person meeting in the state Capitol with a Tribe leader considered humble yet dignified, ready to transform the gambling landscape in Florida. 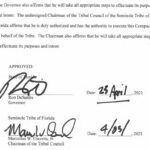 When the new 30-year, multibillion-dollar gambling compact between the state of Florida and the Seminole Tribe of Florida was unveiled that day, only two names were on the document signed on April 23: DeSantis and Marcellus W. Osceola Jr., chairman of the Tribal Council.

As chief executive of the state, Gov. DeSantis is a known political figure who gets publicity every day.

But who is Marcellus W. Osceola Jr.?

Most Floridians probably don’t know much about him. In fact, several state lawmakers in South Florida — Osceola lives in that area — told the Florida Phoenix that they’ve never met him.

Osceola, dressed in tribal clothing, appeared with DeSantis in a photo posted on Twitter, praising the gambling deal that could bring in billions in new state revenues over the next several years.

But he seems to be under the radar since the announcement of the pact that led to a mid-May special session of the Legislature to ratify the gaming compact. (The federal government still has to approve the compact.)

A lobbyist for the Seminole Tribe of Florida told the Florida Phoenix that part of an agreement with the Tribe stipulates that he could not talk to members of the media about the Osceola family or the compact.

The Phoenix was able to get snippets of information about Osceola, in part from a Tribe newspaper. Through a public relations official, Osceola provided answers to some questions posed by the Phoenix. The spokesman for the Tribe also confirmed that Osceola lives in South Florida with his wife and children but didn’t offer any details.

At least to the public at large, Osceola appears to be elusive, yet inspiring.

His vision for the Tribe is geared towards building upon the legacy of past tribal leaders from the Osceola family who set the foundation and instilled certain values to secure a better future for generations of Seminoles.

Osceola elected to lead the Tribe

Marcellus Osceola Jr. was sworn in as the new chairman of the Seminole Tribe of Florida in January 2017 at tribal headquarters in Hollywood, according to The Seminole Tribune.

Tribal leadership consists of five members on the board of directors including Osceola, and the board “has established many programs and projects for the economic betterment of its Tribal members,” according to its website.

“To be the chairman of the Seminole Tribe of Florida is a tremendous honor,” Osceola said in response to questions from the Phoenix. “I am humbled every day to know the majority of the people have entrusted me to provide leadership.”

“I don’t do this alone…they all want to get things done,” he added.

As the leader of the Tribe, Osceola seeks to improve conditions for tribal members by “building better housing and offering better health care,” Osceola said in written answers.

“It’s about continuing to educate our children. It’s also about diversification, to help the Tribe in the future,” Osceola said of his overall vision for the Tribe.

The Osceola family has a history of public service, according to The Seminole Tribune. Osceola Jr. is the grandson of the late Bill Osceola, the Tribe’s first president. And the chairman’s father, Marcellus Osceola Sr., was a Hollywood councilman in the 1970-80s.

“My grandfather got together with other Seminoles under the Council Oak Tree on the Hollywood Seminole Reservation. They went to Washington, D.C., (to testify before Congress) and helped set the foundation for what the Tribe is today. My grandfather’s philosophy was to leave something better than you found it,” Osceola said.

Osceola continued: “My father was a tribal council member. I learned the value of a dollar from him at a very young age. I worked for my grandfather, for my father, and for myself, all to understand how the outside world works.”

In October 2020, Osceola was honored with a national award from the Native American Finance Officers Association (NAFOA), an organization that supports American Indian and Alaska Native communities.

In a video from NAFAO, Osceola is seen accepting the Tribal Leader of the Year Award, presented by NAFOA board members at its 2020 Leadership Awards.

“It is my distinct pleasure and honor to humbly accept and to let everyone know that I did not know I was up for the award, although I appreciate it,” Osceola said at the time.

“But the things that we are doing are not only for our people and our tribes, but for all Native Americans and indigenous people across the world. Making a difference starts with you as a leader and having the right team around you to help facilitate that dream is most important.”

Meanwhile, the ratified gambling compact still faces approval by the U.S. Department of Interior, under the Biden administration. If approved, the deal would benefit the state as well as the Tribe, Osceola said in written answers.

“For the Seminole Tribe, we wanted to be in a place to secure our future,” he said. “We have a 30-year clear path to build for the people. It also means more tourism and more money for local communities; it’s the right thing [to do].”

The ratified compact has drawn criticism from anti-gambling groups such as No Casinos, and sparked petition drives for proposed constitutional amendments sponsored by political action committees to establish new casinos and authorize casino gaming at businesses with cardroom licenses.

As previously reported by the Phoenix, another proposed amendment aims to legalize sports betting in Florida, regardless of the Tribe’s gaming compact with Florida.

“This deal is good for the Tribe and the state. The new gaming compact means more revenue for the state, a guarantee of $2.5 billion in the first five years,” Osceola said.  “We’re the best partner for the state because the money stays here, the money is recirculated here.”

The No Casinos group has argued that overall gaming expansion violates Constitutional Amendment 3 established in 2018, requiring Florida voters to approve any expansion of gambling.

In the new gaming deal, a provision that would allow online gaming had drawn scrutiny from opponents, prompting chairman Osceola to write a letter May 12 to leaders in the Florida Legislature and DeSantis to try to alleviate concerns.

The provision stated that Florida and the Tribe “agree to engage in good faith negotiations within thirty-six (36) months after the effective date of this compact to consider an amendment to authorize the Tribe to offer all types of covered games online or via mobile devices to players physically located in the state…,” according to the letter obtained by the News Service of Florida.

The chairman wrote the letter to Florida House Speaker Chris Sprowls, Florida Senate President Wilton Simpson and DeSantis, saying the online gaming provision “is simply an agreement to continue discussions about online gaming, but there is no enforcement mechanism if the state fails to engage in such discussions.”

Osceola wrote that the Tribe “will not attempt to enforce” the online gaming provision through litigation or other means, if there is “any uncertainty concerning this matter.”

On May 17, House Speaker Sprowls announced that the provision would be deleted.

“As you know, the Tribe has always kept its word in its dealings with the state,” Osceola said in the letter.

Jennifer Kruse, executive director of the Florida Council on Compulsive Gambling, told the Phoenix that she has never met Osceola directly, but credited him for supporting the compulsive-gambling council’s mission to provide resources for gambling addiction in Florida.

At that time, the Tribe had stopped paying the state because they believed officials violated a previous gaming compact.

“What’s key for Osceola, when he became chair, is they did continue to fund the compulsive-gambling council, even when they [the Tribe] ceased payment [to the state],” Kruse said. “And they didn’t have to do that.”

Clarification: In an earlier version of this story, the Phoenix did not correctly define the types of games referenced in the May 12 letter. The language has been corrected.