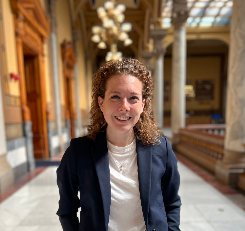 A lifelong Hoosier, Casey Smith is a reporter for the Indiana Capital Chronicle. She previously reported on the Indiana Legislature for The Associated Press. She holds a master’s degree in investigative reporting and narrative science writing from the University of California/Berkeley’s Graduate School of Journalism. She previously earned degrees in journalism, anthropology and Spanish from Ball State University, where she now serves as an instructor of journalism.

Rokita advances complaint against Bernard to Indiana Medical Licensing Board

Indiana Attorney General Todd Rokita on Wednesday sent a complaint against an Indianapolis-based doctor who is at the center of a controversial abortion case to the Indiana Medical Licensing Board. The Republican attorney general said in a statement that Dr. Caitlin Bernard “failed to immediately report the abuse and rape of a child to Indiana authorities” […]

A public interest lawyer in Indiana is suing to block President Joe Biden’s student loan forgiveness plan on the basis that he would be forced to pay state taxes on the canceled debt. It’s one of the first significant legal challenges to Biden’s plan. The federal lawsuit was filed Tuesday in the U.S. District Court for the […]

Indiana’s governor signed into law late Friday a Republican-backed bill that will ban virtually all abortions in the state, making it the first to enact abortion-restricting legislation since the U.S. Supreme Court overturned Roe v. Wade. The ban takes effect on Sept. 15, at which point Indiana will have one of the most restrictive abortion laws in […]