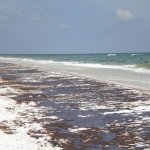 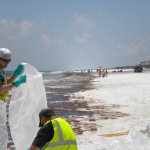 Former Florida Lt. Governor Jeff Kottkamp told a room full of reporters in Tallahassee that oil from the 2010 BP oil spill “didn’t even reach the shores of Florida” – a claim people who witnessed the black goo washing up on Panhandle beaches would dispute.

After Kottkamp made the statement, a reporter asked about it again, and Kottcamp said “tarballs are naturally occurring.”

Kottkamp was in Tallahassee as co-chair of Explore Offshore Florida, an industry group that’s advocating offshore oil drilling along America’s coastline, including Florida.

The oil on Pensacola’s beaches stretched for miles when the slick arrived on currents from the exploded BP oil rig off Louisiana. Workers in white suits descended on the beaches trying to clean it up as it kept washing ashore, as it did for weeks and months afterwards. The state later received billions from BP’s penalty money to compensate communities for lost tourism business and economic damage.

“Anyone who would say that the BP disaster did not reach Florida’s shores is either lying for personal profit reasons, or has no knowledge about the event at all,” said Linda Young, Executive Director of the Florida Clean Water Network and a resident of the Panhandle coastal community of Navarre Beach. “They should not be anyone’s spokesperson.”

“The repercussions of BP’s reckless disaster live on for thousands of people across the Gulf, as well as the marine life, birds and other land-based animals that will not recover in our lifetimes,” Young said. “A call for drilling any closer to Florida’s shores than we have today is absurd and deeply troubling.”

“It’s absurd to claim the Deepwater Horizon spill did not reach Florida, given devastation we experienced from that disaster.  The reality is that there is no such thing as safe offshore drilling.  In Florida, millions of jobs in the tourism industry are at stake in protecting our beaches.  That’s why so many of Florida’s leaders, regardless of what political party they belong to, have been so protective of our coasts all these years.”

Julie Hauserman has been writing about Florida for more than 30 years. She is a former Capitol bureau reporter for the St. Petersburg (Tampa Bay) Times, and reported for The Stuart News and the Tallahassee Democrat. She was a national commentator for National Public Radio’s Weekend Edition Sunday and The Splendid Table . She has won many awards, including two nominations for the Pulitzer Prize. Her work is featured in several Florida anthologies, including The Wild Heart of Florida , The Book of the Everglades , and Between Two Rivers . Her new book is Drawn to The Deep, a University Press of Florida biography of Florida cave diver and National Geographic explorer Wes Skiles.